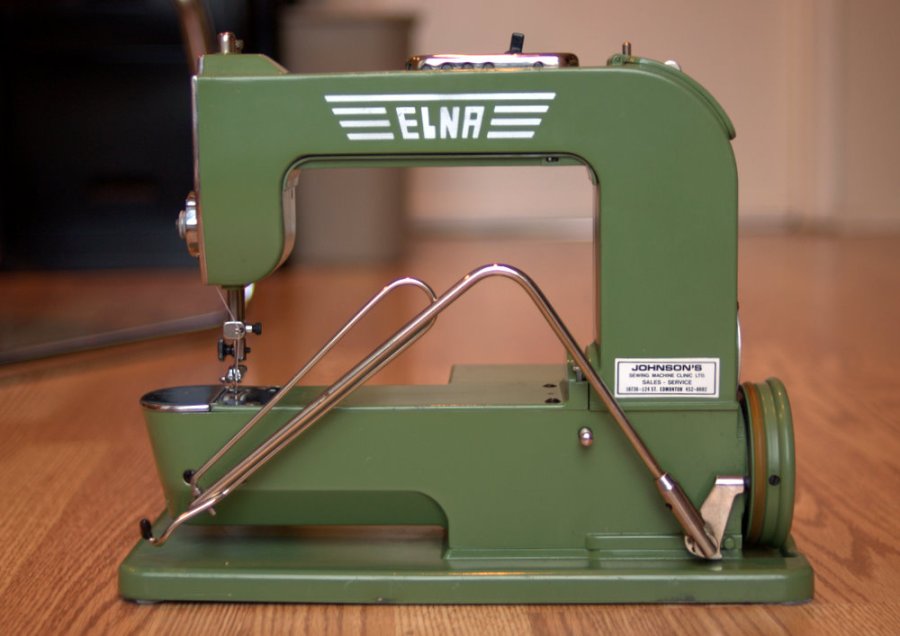 So I had my Elna Grasshopper for almost a year now. To say the truth, I havent sewn much with it. When I first got the machine I did a few project with it and then I stopped when the weather got cold. You might think that is weird, but my little Elna might have a motor issue, as it gives out a slight smoky aroma when I sew with it. So I only sew with it when I can have my windows open and the the air circulating.

Besides the smoky motor issue, after sewing continuously with the Elna, it would have a hard time starting its motor. As you know there’s a knee lever instead of a foot petal on that machine. When I pres the knee lever, the motor would rev up, but will not move the needle. Its not too big of a problem as I just need to give the wheel a little push and it would overcome whatever resistance it encountered and start again.

I suspect that the motor is old and would give out soon. When I bought my hand crank machine, I asked the machine repair guy for suggestions on what could be wrong. He said there are two common issues with Elna Grasshopper:
1. Their motor is small and weaker than other vintage machines. It might just be getting old. To get an Elna Grasshopper motor replaced and rewired, it could cost as much as an Elna Grasshopper itself, which is not worth it.
2. The knee lever pushes 4 brass plates inside the grasshopper to control the speed of the motor. The brass plates are soft and malleable. It is common that they could unintentionally short and do not control well. If you cannot seem to get your motor to go from slow to fast smoothly, and it wont sew at slow speed but instead would sew when lever is pushed further, this could be the issue. Commonly you can also wear a spark and smell some smoke from the short.

So that is the unfortunate news about my little cute grasshopper. I think I will still be sewing with it regardless — cant do much about that motor so I’ll just see if it lasts. For all I know it could stay that way and work for years. It is kind of nice to have a machine (my regular one) threaded in white thread and this one threaded in dark thread. It is great at sewing a nice straight stitch, and it goes forward and reverse very easily.
I’ve been sewing without the outer case, so just on the little arm. It is a little harder to control a straight stitch that way, as your hands dont have much to rest on. So I think I will sew with the case folded out to make it a flat surface next time.
So here is a summary from my point of view for those who are considering getting an Elna Grasshopper:
Pro:
– cute & clean (I’ve almost never seen a dirty Grasshopper! must be the case keeping them clean)
– never misses a stitch
– Great for straight stitch with reverse
– Easy to figure out how to use – threading is pretty much the same as modern machines
– uses a pretty standard, easy to find bobbin
– the small arm is great for sewing those tiny, little armholes.
– knee lever reduce the amount of wires on your desk
– small size and the case it comes with are easy for transportation
Con:
– motors and lever control may have issues in the future
– only does straight stitch
– expensive — it usually goes for about 100-200 dollars on ebay
All in all, I am still really happy to own this machine. I just hope the motor doesnt give out soon!