Thanks to Vicki from AnotherSewingScientist’s suggestion to use a Mei Tai to carry Kaylee around, I made a Mei Tai using varies scrapes from my stash :

Ties are from excessive curtains, the body is from some scrapes my friends left after sewing parties, and padding is poly felt from some failed photo background attempts 4 years ago. It does pay to be an obsessive fabric horder sometimes — you never know when you might need to do a project and doesnt have time to venture out for new fabric!. 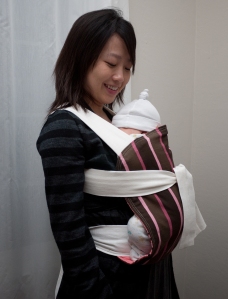 I pretty much just made it up as I went, as it is extremely simple. But I did take a look at a tutorial and how to wear to get an idea of how I want it to look like. I made it a little too short for Kaylee. In the photo her leg is frogged instead of sticking out, so she is sitting taller, and her head isnt completely restrained by the Meitai (only half of the head is restrained, not as much as I would like). So I have to be careful to make sure her neck doesnt fall backwards. But if I can get her to sit instead of squat in there, this wont be an issue.

However, she’s soundly asleep on my in the meitai as I am typing up this post (after a crying session), so I am calling this a success!